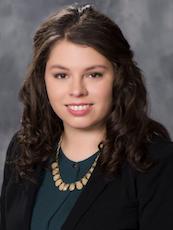 Allyson maintains a general law practice, primarily focusing on the areas of health care litigation and regulations as well as family and veterans law.

She was recognized with the King Award for Excellence due to her hard work in the Veterans Clinic and compassion in veterans work. In 2019, Allyson's work was published in the Veterans Law Journal produced by the United States Court of Appeals for Veterans Claims.

She has also participated in the Harvard Law School Food Law Student Leadership Program which focuses on policy and legal issues surrounding farmers, food charities, and food regulations. Additionally, Allyson spent time working in the Office of the General Counsel of the Department of Health and Human Services where she assisted in nursing home litigation and regulatory guidance. Allyson was raised in Hayti, Missouri, and graduated from South Pemiscot Schools in 2011.