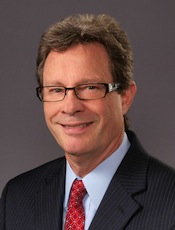 Ted Yates' law practice focuses on estate planning, probate matters, commercial and real estate litigation, insurance litigation, healthcare law and general personal injury. In addition, Ted has significant experience in silicosis cases. Ted is admitted to practice in state and federal courts in Missouri and Arkansas. He served as a city attorney for the City of Ozark, Arkansas, for eight years. He has also served as a hospital administrator and has extensive experience in banking. Ted has handled and argued cases before the Supreme Courts of Arkansas and Missouri.

Ted is a founding member of Osburn, Hine & Yates, LLC and is a member of the Arkansas and Missouri State Bars, as well as the Cape Girardeau County Bar Association.

Ted is married to the former Margaret McGinty, and they have three children. He is active in various community projects, including the Boys & Girls Club of Cape Girardeau. He is a member and past-president of the Cape West Rotary Club. Ted and his family attend Centenary United Methodist Church in Cape Girardeau.