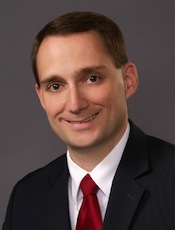 Ross McFerron maintains a general civil practice, primarily focusing on business litigation, estate planning and litigation, personal injury, insurance defense, and agricultural law. Ross is licensed in Missouri state and federal courts. He is a member of the Missouri Bar and the Cape County Bar Association. Ross has been recognized as "Rising Star" by SuperLawyers.com and Super Lawyer's Magazine in 2016, 2017, 2018, and 2019. Ross currently serves on the board of directors for the Missouri Organization of Defense Lawyers, and is former president of the Cape Girardeau County Young Lawyers Association. In 2008, Ross was awarded the W. Oliver Rasch award from the Missouri Bar. Ross is an accomplished trial attorney with first-chair jury trial experience in Missouri state and federal courts. He also has extensive experience in providing legal counsel to successful startup businesses and entrepreneurs.

Ross received his law degree in 2007 from the University of Missouri, where he graduated in the top five of his law school class. During law school, Ross was a member of the Missouri Law Review, the law school's mock trial team, and was elected to the Order of the Coif. He was also awarded the Ike Skelton, Sr. prize for trial advocacy and the R. David Ray trial advocacy award.

Ross comes from a farming family, and draws from his experience in agriculture when he represents his clients. He grew up working on his family's "century" farm just outside of Advance, Missouri and graduated from Advance High School. He earned his undergraduate degree from Southeast Missouri State University in 2004. While at Southeast, Ross met his wife, Alisa. The two married in 2007. They have one son and one daughter. Ross and his family attend La Croix Church in Cape Girardeau.