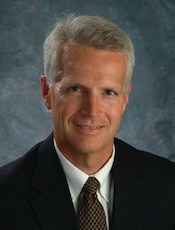 Ted Osburn practices in the areas of health care, professional liability, product liability, commercial litigation, and alternative dispute resolution. He handles cases throughout Missouri and Arkansas. Ted has practiced in Arkansas circuit courts and before all Missouri appellate courts, including the Missouri Supreme Court. He is admitted to practice before the federal courts of the Eastern and Western Districts of Missouri. Ted is an experienced mediator.

Ted was formerly a partner with the firm of Shughart, Thomson & Kilroy in Kansas City and was a member of the firm’s healthcare litigation group. In 1995, he relocated his practice to his hometown of Cape Girardeau, Missouri. Later that year, Ted, along with Jeff Hine and Ted Yates, founded the firm now known as Osburn, Hine & Yates, LLC

Ted obtained his undergraduate degree in electrical engineering from the University of Missouri in 1982. He received his law degree from the University of Missouri School of Law in 1985. While in law school, Ted was a member of the Board of Advocates and was awarded the R. Jack Garrett Prize for Excellence in Trial Advocacy. He also received the Fred L. Howard Award for Excellence in Appellate Advocacy.

Ted maintains an AV rating through Martindale-Hubbell. He is regularly recognized as a “Super Lawyer” in the Missouri and Kansas Super Lawyers Magazine. Ted is a Fellow of the American Bar Foundation.